A Brief History of Fire Extinguishers

A Brief History of Fire Extinguishers

The earliest fire extinguishers were human chains moving buckets of water, hand-to-hand, from a well or water resource to the site of the fire.

The first-ever recorded water pump in 200 B.C. by Ctesibius of Alexandria, “the father of pneumatics.” 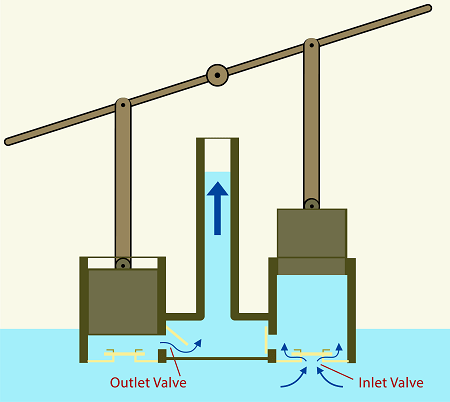 The principle of the pump was relatively simple: Water flows into the inlet valve of a one-way cylinder when the piston is raised. The water is then forced out another one-way valve when the piston is forced down. The water then flows into a delivery pipe. A second cylinder is added alongside the first, with both pistons attached to the main lever for greater efficiency. When one piston goes up, the other piston goes down. During the upward movement of the piston, the cylinder functions as a suction pump, bringing water in through a rising pipe. During the downward direction, the piston forces the water sucked from the pump cylinder into the main pipe.

In the 15th century, Leonardo da Vinci created a super-oven for his patron, Ludovico Sforza, in advance of a celebration. Leonardo understood the danger such an oven could cause, so he created a sprinkler system as a safeguard. As part of Leonardo’s super-oven system, he also built a system of conveyor belts to make the cooking and baking process more efficient. In Leonardo da Vinci’s 15th century version of Kitchen Nightmares, everything went wrong during his patron’s big party. The conveyor belt began running too fast. The cooking area staff could not stay up to date with the flow, and a small fire burst out in the kitchen. A fire broke out in the kitchen, and the sprinkler system flooded and washed away all the food and a good part of the kitchen.

A good summary of Leonardo’s Kitchen Nightmare incident is retold in the following video: 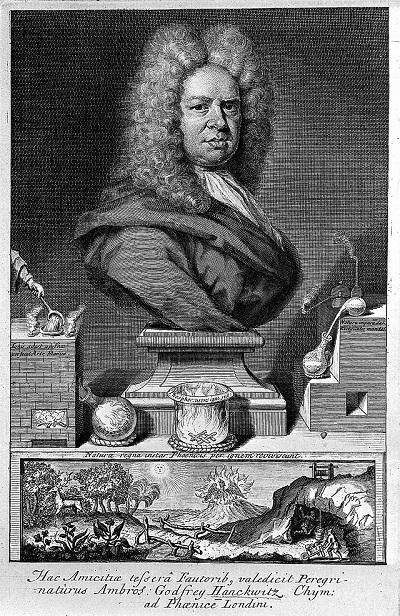 Ambrose Godfrey-Hanckwitz FRS (1660 – 15 January 1741), also known as Gottfried Hankwitz, sometimes written as Hanckewitz, or Ambrose Godfrey as was his preference, was a British phosphorus manufacturer and apothecary who was born in Germany. Godfrey had migrated to London, England to live in 1679. He was one of the first phosphorus manufacturers and the most successful in his time. He invented and patented a device that resembled a fire extinguisher.

This is an antique fire extinguisher claimed to have been designed by Manby, but the author of this article could not confirm this with a primary source at the time of publication. 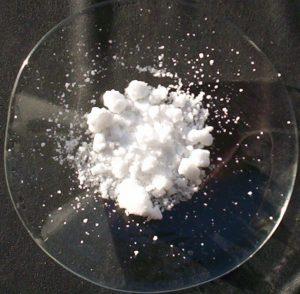 Francois Carlier, invented a different version of Manby’s fire extinguisher. His version is called the soda-acid extinguisher. Carlier decided not to use compressed air, and instead used a device that contained two containers underneath a canister of water. Tartaric acid from one container was mixed with a sodium bicarbonate solution in another container. These two substances would mix and then produce CO2 propellant gas.

1881 – Almon M. Granger Patents the Soda-Acid Extinguisher in the U.S.

Almon M. Granger patented another version of the soda-acid extinguisher in the United States in 1881. Granger’s version used the reaction of mixing sodium bicarbonate solution with sulphuric acid to generate pressurized water. A small vessel was suspended in the cylinder containing sulphuric acid. There were two different versions. In one version, a plunger broke the vessel of acid. A lead stopple was released in another version that held the vessel closed. When the acid was mixed with the bicarbonate solution, the carbon dioxide gas was expelled. This pressurized the water. The pressurized water was then pushed through a nose or hose from the canister. 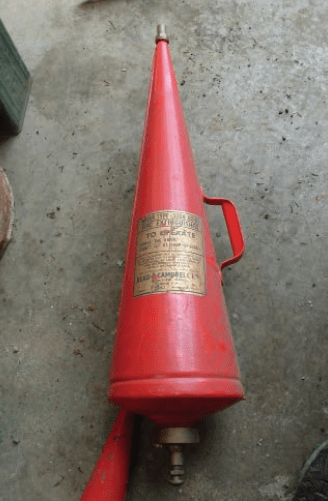 1924 – The Carbon Dioxide Fire Extinguisher Created in the U.S. by the Walter Kidde Company

DuGas (later ANSUL) developed the cartridge-operated dry chemical extinguisher. This device was a copper cylinder with an internal CO2 cartridge. The user turned a wheel valve on top to puncture the cartridge and then squeezed a lever on the valve at the end of the hose. These actions discharged the chemical. This extinguisher used sodium bicarbonate specially treated with chemicals to render it free-flowing and moisture-resistant. This was the first agent available for large-scale three-dimensional liquid and pressurized gas fires, but remained largely a specialty type until the 1950s, when smaller dry chemical units were sold for home use.

In this period, significant developments in dry chemical agents led to the introduction of potassium bicarbonate (Purple K), monoammonium phosphate (ABC), potassium chloride (Super K), and urea potassium (Monnex). Potassium chloride and urea potassium-based dry chemicals are not common in the U.S. Dry chemicals are nonpoisonous. Still, either the acidic-based (ABC) or alkaline-based (Regular or Purple K) chemicals could be an irritant if inhaled. Dry chemical is not recommended for electrical equipment or aircraft fires because the substances may damage the equipment beyond repair.

Monoammonium phosphate (ABC) is the dry chemical extinguishing agent used on class A, class B, and class C fires.

Halon 1211 came over to the United States from Europe, where it had been used since the late 40s or early 50s. Halon 1301 was developed by DuPont and the US Army in 1954. Both 1211 and 1301 work by inhibiting the chain reaction of the fire and, in the case of Halon 1211, cooling class A fuels as well. Halon is still in use today but is falling out of favor for many uses, due to its environmental impact.

Monoammonium phosphate (ABC) is the most commonly used extinguishing agent in most fire extinguishers used today.